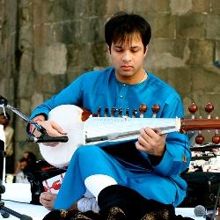 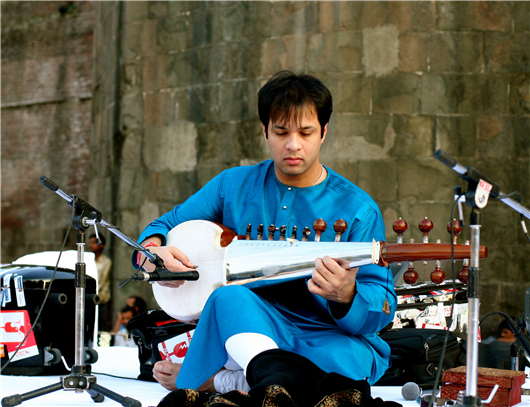 A young talent of the 7th generation in an unbroken chain of the Senia Bangash School, Amaan Ali Khan is the elder son and disciple of the Sarod Maestro Amjad Ali Khan and grandson of the Haafiz Ali Khan. Initiated into the fine art of Sarod playing at a very tender age, Amaan began his public performances as early as eight. Accompanying his father to various music festivals in India and abroad, he has today, carved out a niche for himself. His performances have evoked creditable applause. His precision in tunefulness and his bold and resonant strokes are all pointers to importance of tradition and continuity in Indian Classical Music. He made his debut abroad in 1986 at the Festival of India in Moscow. In 1990, Amaan performed in UK and at the Asia Society in 1991 in New York. Today, Amaan is considered as one of the finest young Sarod players and has attained a very special place for himself to all music enthusiasts. Amaan has been a regular performer at Palais beaux-arts in Brussels, ESPLANADE in Singapore, Chicago Symphony Center, Carnegie Hall and Kennedy Center in USA, Royal Festival Hall and Barbican Center in UK. In addition he has performed for the Temenos academy at St. James Palace in London for HRH Prince of Wales in 1995, 1997 and 2003. In 2001 Amaan took partat the Summer Arts Festival in Seattle and the Edinburgh Festival in UK in 2002. Amaan’s Australian Tour in 2003 included his performances at the World Beat Festival in Brisbane, Opera House in Sydney and the WOMAD Festival in New Plymouth and Adelaide. Amaan performed with Cellist Matthew Barley and the National Youth Orchestra of Great Britain in July 2002 along with a series of workshops. Amaan, beyond playing the Sarod, also anchored Top Drive, the all new television series on Star World that was aired from January end 2003 for five episodes and also took part in the relay for the 2004 Athens Olympics in New Delhi in June 2004. The Songlines World music magazine on reviewing his latest solo recording titled ‘Amaan’ stated “ worthy heir to his father’s crown.” In 2005 Amaan composed for the music for the film American Daylight by academy award winner Rodger Christian.. The spring of 2005 saw collaboration at the Savannah Music Festival in Georgia with the Derek Trucks Band. Same year, he featured with his father in Real World Record’s much-acclaimed album Moksha in May 2005. In early 2010, Amaan co-authored his second book with Ayaan called 50 Maestros 50 Recordings for Harper Collins and also released an album called The Music Room and Sarod Symphony with his father and guru. Recently, the Khans collaborated with American Folk artist Carrie Newcomer at Lotus Arts Festival in Bloomington and also performed at The Palace of Fine Arts in San Francisco. Amaan was recently felicitated by the Swiss brand Raymond Weil for his achievements over the years at the launch of their new collection of timepieces titled Freelancer Amaan performed recently at New York’s Metropolitan Museum. The latest album Rang - Colors of Sufism released in March features Amaan and Ayaan’s interpretations of traditional Qawwalis on the Sarod.