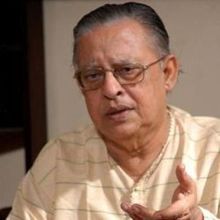 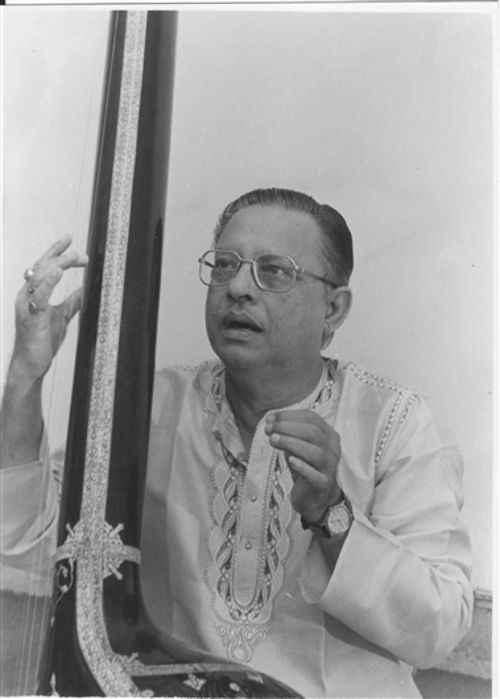 Arun Bhaduri today ranks among the brilliant set of musicians who rose to great heights as an youth. From his utter humility, winsome manners and soft-spoken voice, one would never gauge that he is an artist of such great depth and vision. Gifted with a deep sonorous and nimble voice with a brilliant range, his music is speed in emotion with each phrase one feels a tug at heart. His fluency is again something rare. He manages to portray very soulful and moving pictures of Ragas. “He does not have in any musician’s shadow and strives to create a style of his own suited to his own musical personality.”(The Statesman, Calcutta). His foundation in classical music is sound. Born in Murshidabad, West Bengal, he has had the privilege of being tutored by no less a master than Md. Abu Daud. He further acquired embellishments in his music by learning from Md. Sagiruddin Khan. His talent brought him to Sangeet Research Academy in 1978, where he won a scholarship and had the opportunity of receiving training from Late Ustad Istiaq Hussain Khan of Rampur gharana. It was only the genius in Arun that enabled him to blend all these styles beautifully and create a style of his own which is inimitable. He got further encouragement from Padmabhushan Pandit Gnan Prakash Ghosh who not only taught him classical and light classical music but also made him aware of the nuances in lyrics. A regular and popular Top Grade artist of All India Radio and Doordarshan (Indian National Television),has performed several times in the national concerts. This popular vocalist has already made a mark in the world of music with his sweet and melodious renditions having an effective blend of imaginative and organised demonstrations. He also had his share of music sanmelans and concerts not only in India but abroad. He has had invitations from music festivals of UK, USA, Canada, Japan, South Korea, Indonesia, Thailand, Hong Kong, Philippines, Bangladesh etc. Everywhere he performed, has met with thunderous applause. His rendering of light classical streams like Thumri, Kajri and Bhajans with the same ease and devotion as in his classical music, has also added to his personality. He is among the very few creative musicians of Bengal who performs as well composes with same command over Bengali songs. Television a strong media where he is a frequent participant both in classical and light classical streams. He has got numerous cassettes and CDs of classical and light classical music and also a very interesting and popular set of cassettes of music lesson already released by the West Bengal State Music Academy and rcently one set for the students of Prayag Sangeet Samity - Allahabad containing all the ragas of the course from Bangiya Sangeet Parishad. Arun Bhaduri, who is also a remarkable lyricist and composer of both classical and other stream of Indian music, has magic in his music with which he has won the heart of music lovers throughout the world. HMV Saregama released a cassette containing eight beautiful creation of his thoughts, written and composed by him in eight ragas from dawn to dask. Pt. Bhaduri received numerous awards and honours. The prestigious “Jadubhatta Purashkar” by Salt Lake Cultural Association in 1994 as a “Guru” of Indian Classical Music and Twice recipient of “Dishari” award, to name a few. He is at present a senior member of the faculty (Guru) of Sangeet Research Academy and senior member of West Bengal State Music Academy advisory board. He is also in the board of selection committee of All India Radio and the one of the honorary signatory of the Prayag Sangeet Samity examination board - Allahabad.

Why Book Arun Bhaduri Through ArtiseBooking?