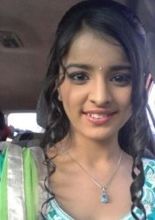 Mahima Makwana is a growing Indian TV actress. Mahima Makwana is best known for her role of Rachna in Zee TV's show Sapne Suhane Ladakpan Ke. Teenager Mahima Makwana was also seen in Imagine TV's Sawaare Sabke Sapne - Preeto as Preeto's youngest sister. She also has shows like Jhansi Ki Rani, Mile Jab Hum Tum, Balika Vadhu, C.I.D, Aahat, Mohe Rang De and ads like Rin Ad, Masala Ad to her credit. She loves Acting, Dancing, Singing, Reading. Mahima Makwana started her career by enacting various short roles in Balika Vadhu.Jhansi ki Rani,C.I.D.,Aahat,Mile Jab Hum Tum,Mohe Rang De, and was a part of two advertisement telefilms Rin Ad,MasalaAd. She got her first break as a popular character in Sawaare Sabke Sapne - Preeto as Preeto's youngest sister. Currently,she is in the lead for the show Sapne Suhane Ladakpan Ke playing the character of Rachna. Mahima Makwana as Rachna in Sapne Suhane Ladakpan Ke Rachna is a simpleton who has spent all her life in the small town of Varanasi. The long hair, ponytailed girl clad in loose fitting salwar kameez with no make-up on her eyes has been brought up in a very traditional and conservative environment. Her father has laid strict rules and regulations for her which has never made her question anything in life. The difference in upbringing, values and attitude between Gunjan and her becomes quite apparent when they start living together. Her encounter with her free spirited cousin opens up the window into a world that she has neither lived nor wants to experience.

Why Book Mahima Makwana Through ArtiseBooking?