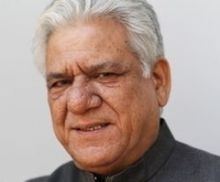 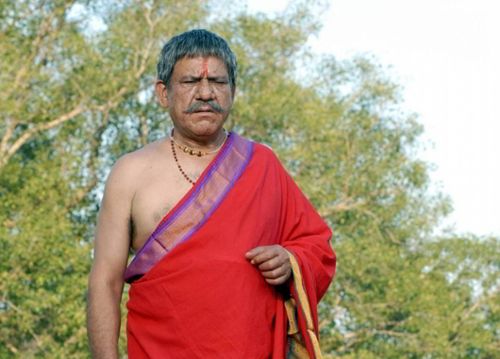 Om Puri OBE (born 18 October 1948) is an Indian actor who has appeared in mainstream commercial Indian films, Independent films and art films. His credits also include appearances in British and American films. He is also the winner of the Padma Shri Award, India's fourth highest Civilian Award. Om Puri was born in Ambala, Haryana. He graduated from the Film and Television Institute of India. He is also an alumnus of the 1973 class of National School of Drama where Naseeruddin Shah was a co-student. Puri has worked in numerous Indian films and in many films produced in the United Kingdom and the United States. He made his film debut in the 1976 film Ghashiram Kotwal, based on a Marathi play of the same name. He has claimed that he was paid "peanuts" for his best work. He has collaborated with Amrish Puri as well as Naseeruddin Shah, Shabana Azmi and Smita Patil in art films such as Bhavni Bhavai (1980), Sadgati (1981), Ardh Satya (1982), Mirch Masala (1986) and Dharavi (1992). He has been active in cinema.He was critically acclaimed for his performances in many unconventional roles such as a victimized tribal in Aakrosh (1980) (a film in which he spoke only during flash-back sequences); Jimmy's manager in Disco Dancer (1982); a police inspector in Ardh Satya (1982), where he revolts against lifelong social, cultural and political persecution and for which he got the National Film Award for Best Actor; the leader of a cell of Sikh militants in Maachis (1996); as a tough cop again in the commercial film Gupt in 1997; and as the courageous father of a martyred soldier in Dhoop (2003). In 1999, Puri acted in a Kannada movie A.K. 47 as a strict police officer who tries to keep the city safe from the underworld — it became a huge commercial hit. Puri's acting in the movie is very memorable. He has rendered his own voice for the Kannada dialogues. In the same year, he starred in the successful British comedy film East is East, where he played a first-generation Pakistani immigrant in the north of England, struggling to come to terms with his far more westernised children. Puri had a cameo in the highly acclaimed film Gandhi (1982, directed by Richard Attenborough). In the mid-1990s, he diversified to play character roles in mainstream Hindi cinema, where his roles are more tuned to mass audiences than film critics. He became known internationally by starring in many British films such as My Son the Fanatic (1997), East Is East (1999) and The Parole Officer (2001). He appeared in Hollywood films including City of Joy (1992), opposite Patrick Swayze; Wolf (1994) alongside Jack Nicholson; and The Ghost and the Darkness (1996) opposite Val Kilmer. In 2007, he appeared as General Zia-ul-Haq in Charlie Wilson's War, which stars Tom Hanks and Julia Roberts.He has worked in Hindi television serials like Kakkaji Kaheen (1988) (roughly meaning "Uncle says") as a paan-chewing 'Kakkaji', which was a parody on politicians, and Mr. Yogi (1989) as a suave 'Sutradhaar' who enjoys pulling the protagonist's leg. These two serials underlined Om Puri's versatility as a comedian. He received critical acclaim for him performance in Govind Nihalani's television film Tamas (1987) based on a Hindi novel of the same name. He essayed comic roles in Hindi films like Jaane Bhi Do Yaaro which reached a cult status, followed by Chachi 420 (1997), Hera Pheri (2000), Chor Machaye Shor (2002) and Malamaal Weekly (2006). His more recent Hindi film roles include Singh Is Kinng, Mere Baap Pehle Aap and Billu. Puri was seen in the role of Mohammad Ali Kasuri in Road to Sangam (2009). In 2010, he appeared in The Hangman. In 2011 he was in the Indian action movie Don 2. He has also worked in Aahat TV Series in some episodes during second season which was aired between 2004-2005 on Sony channel. Om Puri would be seen on small screen in a crime show Savdhan India’s second season on Life OK. He will again be seen in Punjabi movies through Putt Jattan de the Jatt boys (2013). A breach of privilege notice was issued against Om Puri in the Parliament of India for allegedly making derogatory remarks against the politicians during the fast carried out by Anna Hazare for Jan Lokpal Bill at Ramlila Maidan in New Delhi in August 2011.

Why Book Om Puri Through ArtiseBooking?