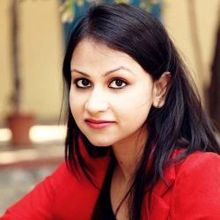 Aanchal Khurana is an Indian Television Actress. She was born in New Delhi, India on August 6, 1990. She is the winner of the Title MTV Roadies Season 8, After that she become popular because of their beauty and performancen in Roadies. She faced many problems become a celebrity.

Aanchal Khurana was born on 6 August 1990 in Delhi, India. She has one elder brother, who is three years older than her. She quit a course of Hotel management from Chandigarh and completed her degree in Commerce through correpondence from DU. She also enrolled herself in fashion designing course at Janaki Devi College. On the basis of her score she won "Best student Award" in her college. She reached the peak in heights by winning the MTV Roadies title. At a very young age of 23, she has done a miracle by winning MTV Roadies show. Aanchal is a clean hearted and focused girl. What matters to her the most is her family's happiness.

Delhi girl Anchal Khurana was seen as Charu in Zee Tv's popular show Sapne Suhane Ladakpan Ke(SSLK). The devious lady has re-entered in a new glamorous look. Last seen in as a traditional and simple lady, she has entered boasting a flamboyant and modern avatar. She is seen in ultra-glamorous new look wearing western clothes and high boots. Anchal is portraying the character a village girl Meethu who hides her face with a ghoonghat. She came as Vikram's (Rahul Sharma) fiance to spoil the happiness of Mayank and Gunjan.

Why Book Aanchal Khurana Through ArtiseBooking?