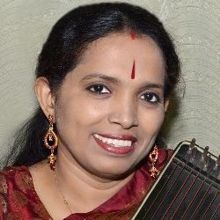 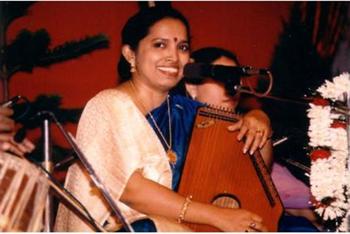 The musical heritage initiated by Ustad Bade Ghulam Ali Khan Sahib has meandered through the ages and is still survived by a quite a few young promising talents. The direct disciple of Pandit Ajoy Chakraborty - Anjana Nath, is unambiguously identified as one of them.

Born in 1968 Anjana started singing from her early childhood and blossomed under the shade of her pious mother, Smt. Kusumita Nath; but her first formal teacher was Smt. Meera Banerjee, who is regarded as one of the frontlines among the disciples of Ustad bade Ghulam Ali Khan. Later on she persuaded her talim under Late Lalit Mohan Sanyal.

In the year 1989, making a breakthrough Anjana got the coveted scholarship of 'Sangeet Research Academy', Kolkata. From then on Guru Pandit Ajoy Chakraborty has taken the guiderole of her musical career. She fully stretched herself under her master's strict vigilance in learning, training and practice.
Anjana's relentless effort enabled her to continue in the same characteristic saga of her great predecessors. One can find the now rarely heard pure 'Aa-Kar', which is one of the unique specialties of `Patiala Gharana' in her recital. Apart from that, her applications and innovative experimentations with laya, complex rhythmic divisions, 'Sargam and Taan', reveals not only emotion but the devotion and insight present in her 'sadhana'.

Meanwhile many accolades she had bagged herself. She emerged as the topper in the khayal and Thumri Competitions organized by ‘The Dover Lane Music Conference’, The State music Academy W.B. The Prayag Sangeet Samity Allahabad etc. She also got the National talent search Scholarship given by the Govt of India.

She is an 'A' grade artiste of all India Radio & Doordarshan (Television) as well as a research fellow of Govt. of India and also an examiner of Rabindra Bharati University. Some Bengali light classical songs composed by her ushered high applause from the TV viewers’ end as well.

Why Book Anjana Nath Through ArtiseBooking?