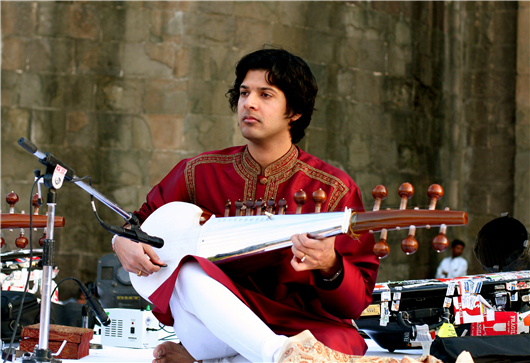 Ayaan Ali Khan represents the seventh generation of a musical lineage known as the Senia Bangash School. The younger son and disciple of the Sarod Titan Amjad Ali Khan, Ayaan stepped into the world of music and the Sarod, at a very early age, with confidence, clarity, consistency and technical mastery that he learnt at his father's knee. Ayaan has been performing concerts in India and world –wide, since he gave his solo debut at the age of eight. He has given many other solo performances and also assisted his illustrious father at concerts all over the world.
Ayaan has won the hearts of music lovers both in India and abroad. He made his UK debut in 1989 and US Debut in 1991 at the Asia Society in New York. From 1997 onwards Ayaan has performed regularly at the Carnegie Hall and Smithsonian in the US, Palais Beaux-Arts in Brussels, Chicago Symphony Center, ESPLANADE in Singapore, Summer Arts Festival in Seattle, Edinburgh Music Festival and the Royal Festival Hall in London. Ayaan made his debut tour in Australia early this year. He has also played concerts at the WOMAD Festival in Adelaide and New Plymouth, World Beat Festival in Brisbane WOMAD Rivermead Festival in UK, and the Opera House in Sydney. Ayaan performed at St. James Palace in July 1997 for the Temenos Academy and has also collaborated with the noted Cellist Mathew Barley of UK at the Royal Festival Hall in 2002. In July 2002, Ayaan conducted a workshop for the National Youth Orchestra of UK with Matthew Barley which followed by a concert with the NYO. In 2000, Ayaan joined his father at the Dalai Lama’s Sacred Music Festival inauguration in New Delhi. Over the years Ayaan has been a regular performer at Konzerthaus in Vienna, - Symphony Hall in Birmingham, Bridgewater Hall in Manchester, Recital Hall, Het Concertgebouw in Amsterdam, Centre d`Art Contemporain, Geneva and the UN International Labour Organisation auditorium, Geneva.