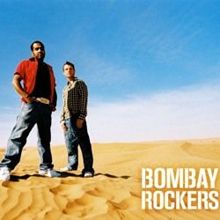 Bombay Rockers is a Denmark, Europe based band widely famous in India. Their Genres are Pop, Hip Hop Rock Bhangra. The band formed in 2002 by Navtej Singh Rehal, Thomas Sardorf and Janus Barnewitz. They debut in 2002 in Music Industry.

In 2002 Navtej Singh Rehal was Introduced to the Scandinavian producer team of WCA, Thomas Sardof and Janus Barnewitz ae already the member of WCA. Where they stratrd mixing a hybrid of R&B, Hip Hop and Bhangra Influenced vocals reflecting their varied cultural background.

Their fast song Ari Ari was got massive success in india and national wide. In july 2003 Bombay Rockers went on stage with the house duo Filur at Rockilde festival in front of roughly 25,000 people. A month later they were performing in The Images of Asia Festival, as well as playing numerous concerts in Copenhagen and the rest of Denmark. In February 2003, they performed with the famous English DJ project Panjabi MC.

In 2003 "Sexy Mama" released was the first official single album was also a huge successful album Introducing. The next album "Rock Tha Party" become a major radio hit. While their third single and video for "Wild Rose" (shot in Dubai) and debut album. Bombay Rockers' debut album was released in more than 32 countries worldwide in 2005. In Germany "Sexy Mama" was released in mid-2005 and is getting a lot of airplay and buzz.

The Rockers are currently enjoying great success in India and Pakistan. Their album has sold more than 100,000 copies and has now gone five times platinum. It was 1 for 15 consecutive weeks on the Indian Album Charts. They were also the supporting act for the popband Westlife at gigs in Dubai and Bahrain.

The new album "Rock and Dhol" was released worldwide on iTunes on March 21 and the CD released in India on March 29, 2011. The album consists of 12 tracks and again puts a lot of influence on the hybrid of R&B and Bhangra. The album is getting really positive reviews and the singles "Lets Dance", "Nava Nava" and "Ishq" are already proving immensely popular with the masses and are getting a great deal of airplay on the Indo-Pak radio circuit. Response in Denmark has also been good.00

Why Book Bombay Rockers Through ArtiseBooking?