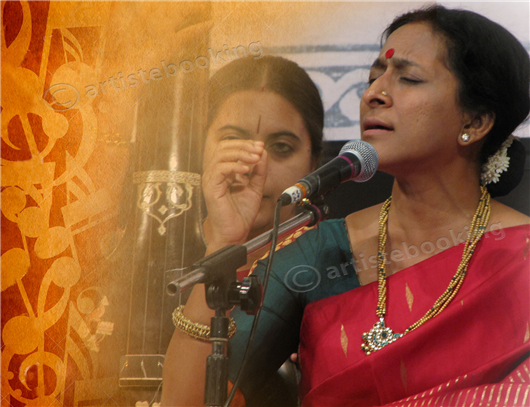 Jayashri Ramnath is an Indian Carnatic Music Vocalist and music composer she is a disciple of violin maestro Lalgudi Jayaraman.

Jayashri was born in Kolkata, into a family of music connoisseurs and musicians. While growing up in Mumbai, she started training in Carnatic music under the guidance of her parents Seetha and N. N. Subramaniam. She attended St. Anthony's High School in Chembur. Soon, she went on to learn with T. R. Balamani, and trained under her for a period of 10 years. Jayashri was also initiated into Hindustani music and trained under Mahavir Jaipurvale and Ajay Pohankar for about six years. When she moved to Chennai, she came under the guidance and mentorship of her guru Lalgudi Jayaraman. She also learnt the veena from G. N. Dhandapani Iyer. Jayashri has a Bachelor of commerce degree from R.A. Podar College, Mumbai. She also has a Diploma in music from Gandharva, Mahavidyalaya, New Delhi.

Jayashri's jugalbandis with Ronu Majumdar and Shubha Mudgal have been very well received. She has dialogued with artistes in dance like Leela Samson and Priyadarsini Govind. Jayashri has sung Thirukkural and an Annamacharya verse in the prestigious audio autobiography - Wings of Fire of former President Shri Abdul Kalam. She performed in 'Bhaire Baanvari', the story of Meera, conceptualized and directed by Gowri Ramnarayan. She also was a part of 'Mathemagician' with actor V Balakrishnan and written by Gowri Ramnarayan. Jayashri also performed at the MTV Coke Studio(India) Season 1 with Ustad Rashid Khan and Richa Sharma. Jayashri also conceptualized 'Listening to Life' - A concert that features the journey of a musician as a lover of music.

Jayashri is also a playback singer whose film music includes collaborations with composer A. R. Rahman on the song "Narumugaiye" from Mani Ratnam's Iruvar. Collaborations with music composer Harris Jeyaraj has won her the Filmfare Awards South for Best Female Playback Singer – Tamil for the popular song "Vaseegara" from the Tamil film Minnale. She sang in Mahesh Dattani's 'Morning Raga' for the music of Amit Heri. She has also sung in various films in Hindi, Kannada, Telugu and Malayalam languages. She collaborated with composer Mychael Danna on "Pi's Lullaby" from the film adaptation of Yann Martel's book Life of Pi in 2012.

In 2001, Jayashri, along with Sanjay Subrahmanyan and T. M. Krishna wrote the book 'Prof. Sambamoorthy, the visionary musicologist', detailing the life and times of Prof.Sambamoorthy - eminent Indian musicologist. The book was published to commemorate his birth centenary. In 2007, Jayashri, T. M. Krishna - leading Carnatic vocalist and Mythili Chandrasekar - Senior Vice President at JWT together wrote the book ‘Voices Within’, - a one-of-a-kind coffee table book that captures the pioneering spirit of 7 of the greatest Carnatic masters of the previous generations. Jayashri featured in the first full length Carnatic music film ‘Margazhi Ragam’, conceptualized by Director P Jayendra. This was a ground breaking venture that showed Carnatic music in a whole different light. The movie, released in 2008, used the very best and latest technologies for video and sound recording. In her quest to reach music to the next generation, she along with T. M. Krishna and YACM initiated Svanubhava — a week-long Music Festival, exclusively for students of music, which continues to be conducted annually.