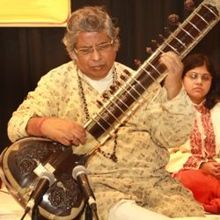 Pandit Devabrata (Debu) Chaudhuri is a Sitarist and a teacher. He is the winner of the Padmabhsushan and Padmashree awards. He is the writer of three books, composer of eight new raga’s and numerous musical compositions. From 1963 he has appeared in numerous radio broadcasts, and he is a disciple of Mushtaq Ali Khan. He is considered a leading Sitarist of Post War era. He is regarded as one of the leading proponents of Senia Style (or Gharana). He is the former Dean and Head, Faculty of Music, University of Delhi. His music is noted for its sweet sinking ringing tone. He currently stays with his son, daughter-in law and niece at Chittaranjan Park, New Delhi