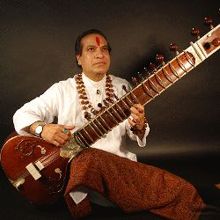 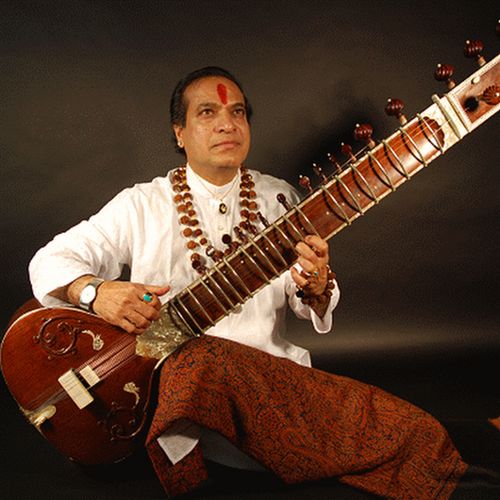 Pandit Habib Khan has emerged among his peers as one of the most influential musicians and an ambassador of Indian classical music in this century. Pandit Habib Khan is well-known amongst musicians of his generation as one who constantly strives to expand the boundaries of music.
An all India Radio performer since the age of seven, Pandit Habib Khan was born into a family of musicians and can trace his lineage back several generations to when classical music enjoyed the patronage of the nobility and royalty of India. He began his training at the tender age of five under the strict eye of his accomplished father, Ustad Hameed Jaffer Khan. Hailing from Indore, the Jaffer Khan family is well known for their unique style of playing the sitar, melding the effect of the human voice and the instrumental tone into a harmonious whole.
Pandit Habib Khan creates music which spans many genres. He has become an important contributor to the Indo American Classical music world as well as to the Jazz scene and the fusion movement in the United States. As an accomplished composer and vocalist, he is as much at ease with light classical and devotional music as he is with pure classical renderings of Ragas. His talent further extends beyond the traditional genres of India to embrace a highly creative exploration of eastern/western modes of music.
Pandit Habib Khan frequently uses Western guitar, drums, violin & Japanese Taiko drums in his orchestral compositions. He has personally taught many Western musicians how to play ragas on these instruments.
Pandit Habib Khan lives and teaches in the San Francisco Bay Area and is the founder and artistic director of the Habib Khan Saraswati Temple and Gurukul, a non-profit organization dedicated to promoting the classical music of North India. The Habib Khan Saraswati Temple and Gurukul is committed to providing a conservatory in which the classical music traditions of India can continue to flourish in a modern cross cultural context. Indian Classical music has no written form and hence is taught in a traditional "Gurukul" setting. The "Gurukul Way" involves a high degree of commitment, and dedication between the guru and the shishya (teacher and student).
Opportunities are offered for the students to learn Indian Classical music as well as orchestral compositions where Indian Classical music is blended with instruments and voices from around the world. They are given an opportunity to perform on stage with musicians hailing from different parts of the world. The exposure of students to this form of music allows them to gain an appreciation of not only the classical music of India but to music of different generations and genres.
The teaching methodology in the Gurukul is traditional. Students are given an opportunity to explore Ragas, Thumris, Ghalzals and Bhajans. Music is taught to children and adults.
We assure in every way possible the survival of this timeless method of propagation of musical knowledge and the unique enrichment it provides for generations to come.