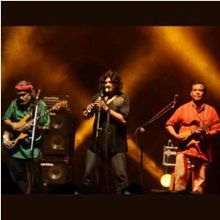 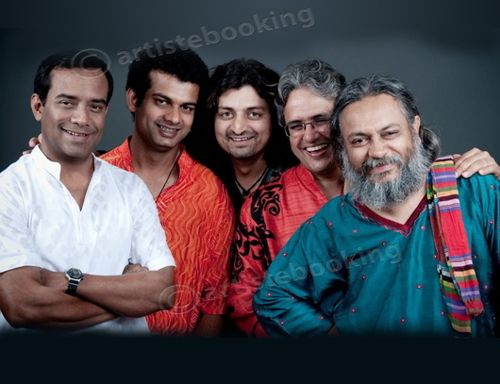 Indian Ocean is an Indian Rock Band fromed in New Delhi in 1990. Who is the poineer of the fusion rock genre in India. Sumit Sen, Asheem Chakravarty, Rahul Ram and Amit Kilam were band members till Chakravarty's death on 25 December 2009. The musical style of the band can be at best classified as fusion music, But some critic describe the band as Indo Rock fusion with Jazz-spiced rhythms that integrates Shlokas, Sufism Enviormetalism, Mythology anf revolution. In 2010 they released their latest album 16/330 Khajoor Road online for free.

In the early 19890's Asheem Chakravarty was Playing tabla for a Bengali Band Niharika. In 1984 Susmit Sen who was a fan of Niharika, met him during a concert. They hit it off right away. Chakravarty was taken up by Sen’s guitar-playing and his vision to evolve a new sound. Sen, in turn, learnt the nuances of rhythm from Chakravarty.

For the next 3 years, they kept on experimenting with their music with Sen on guitar and Chakravarty on tabla and drums. Yet so far they did not write any lyrics at all. Apart from a concert at Roorkee University, there were not many notable performances by them.

In 1990, they were struggling hard to come up with a demo recording of their band. Sen sold his electric guitar to raise money for the purpose. They chose to call themselves Indian Ocean which came as a suggestion from Sen's father. They had also drafted Shaleen Sharma as the drummer, and Indrajit Dutta and Anirban Roy as bassists.

They recorded the demo, taping an incredible 45 minutes consisting of 7 songs in just one day. Despite the rushed recording, the quality of the demo tape impressed HMV enough to offer them an album deal.

In 1991, Rahul Ram who was Sen's schoolmate at St. Xaviers, Delhi, joined the band replacing Anirban Roy on bass. They started work on their first album. To their frustration, the album took about a year to get finished. But when their eponymous debut album came out in 1993, it sold over 40,000 copies within a year of its release. It became the highest selling record by any Indian band at that time.

In 1994, drummer Shaleen Sharma left the band. He was replaced by Amit Kilam who was much younger than the other band members. Barely out of his teens, he was still taking his college exams. This line-up with Susmit Sen, Asheem Chakravarty, Rahul Ram and Amit Kilam became the most recognizable and the most successful in the band's timeline so far. Since then they rolled out a live album Desert Rain and two studio albums Kandisa and Jhini. They also composed the soundtrack of Black Friday and contributed a couple of tracks to the soundtrack of Peepli Live.

In December 2009 the band lost Asheem Chakravarty. He was hospitalized in Doha in October, after suffering a heart attack. He was comatose for a brief period and recovered well. On 25 December 2009 he died in New Delhi due to a Cardiac Arrest.

Indian Ocean has so far not announced any permanent replacement for Chakravarty. However, they have brought Himanshu Joshi to fill in for Chakravarty's vocals and Tuheen Chakravarty for tabla and other percussion which Asheem Chakravarty used to play.

The band announced release of their first studio album after the death of Asheem Chakravarty, 16/330 Khajoor Road. The band made the whole album available for download from their site by adding one new song each month.

The album 16/330 Khajoor Road was released in a two-CD pack. The album was recorded at Kshitij Studios, New Delhi and mixed by Aakash Gupta and Amit Kilam.

Why Book Indian Ocean Through ArtiseBooking?