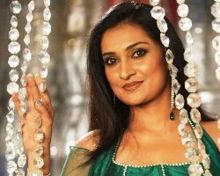 Lalitya Munshaw is a renowned singer and has received extensive training in Hindustani classical music from Ustad Shaukat Khan of Agra Gharana and voice culture training from Padamshri Late Shri Kalyanji and Anandji. Born to connoisseur parents with strong musical beliefs embedded deep into her family, Lalitya has her roots into music. Blessed with a melodious voice Lalitya has clear inclination to express music through her performances on Indian as well as International platforms. With classical training she has forayed into Fusions, Film songs, Romantic melodies, Bhajans and Ghazals. As a live performer she has had the privilege of working with stalwarts like Hariharans, Anup Jalota, Pankaj Udhas, Shivamani, Louis Banks, Ronu Majumdar, Neeladari Kumar, Abhijeet and Vinod Rathod. Lalitya's most popular fusion album 'Maika Piya' was launched by the Dream Girl of the industry Hema Malini, her romantic album 'Rum Gaya Dil' by the romantic hero of the 70's Rishi Kapoor.Gujarat Chief Minsister Narendra Modi launched Lalitya Munshaw's Album 'Halarda' and 'Lori', 'Guru Om' a spiritual Album was released by Sri Sri Ravishankarji. Lalitya feels that music is enough for lifetime but lifetime is not enough for music. With this dedication Lalitya also runs a music studio Re n Raga  and a music production company Red Ribbon Entertainment Pvt. Ltd. and soon she is all set to bring a new album for her music lovers.