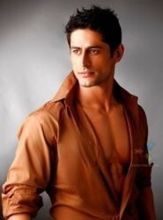 Mohit Raina (born 14 August 1982) is an Indian television and Bollywood actor, most known for the lead role of Lord Shiva in the TV series, Devon Ke Dev – Mahadev, (2011 - present), prior to which he had acted in TV soaps Chehra (2009) and Ganga Kii Dheej (2010). Raina grew up in Jammu, and later finished in the top five slot in the Grasim Mr. India 2005 competition. He started his acting career with a sci-fi TV show called Antariksh (2004) and later went on to play a role in the Mithun Chakraborty starrer film Don Muthu Swami (2008). Born and brought up in Jammu in Jammu and Kashmir state, Raina he did his schooling from Kendriya Vidyalaya, Jammu, he left Jammu after graduating with a degree in commerce from Jammu University. While still getting ready to become a chartered accountant, he moved to Mumbai to pursue his acting dreams. As a teenager in Jammu, Raina weighed 107 kg, but lost 29 kg after he decided to participate in the modeling competition, 2005 Grasim Mr. India contest, where he was placed among the top five contestants. Raina currently lives in Mumbai. His acting career began in 2004 when he acted in a science fiction TV show called Antariksh that aired on Star Plus. In 2008, he starred as JaiKishan in a comedy movie called Don Muthu Swami, starring actor Mithun Chakraborthy in the lead role, however the film too didn't do well. He again returned to television in 2009 with another Star Plus show called Chehra, a suspense drama revolving around a handicapped girl. Mohit played her husband Garv, a young business tycoon. He was also a part of Bandini on NDTV Imagine. In December 2010, Raina played the male lead, Agantuk, in a show Ganga Kii Dheej on Sahara One, where he played a pivotal role in eradication of the evil customs of the village. After laying low for a while after Ganga Kii Dheej, Raina came back in late 2011 as he bagged the role the main lead in Nikhil Sinha's Devon Ke Dev - Mahadev, which started in December 2011, on Life OK channel. The series focuses on the God, Shiva and portrays his journey from a hermit to a householder through his marriage to Sati and later to Parvati. The actor worked on improving his physique for the role, though, he was trained dancer in jive and hip-hop form, he started learning the Indian classical dance form Kathak, which is integral part of his role as Shiv. As the serial grew in popularity, remained in the prime time slot usually reserved for daily soaps, Raina too received widespread acclaim, he played for over 30 different characters in the series, and especially for his double role as Jallandhar.

Why Book Mohit Raina Through ArtiseBooking?