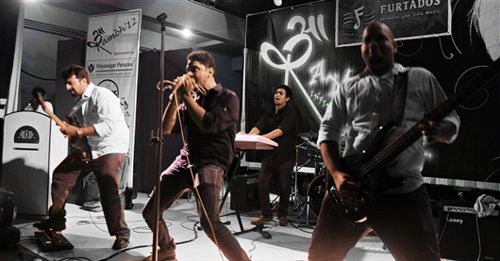 Moksha is an Indian rock band group from Chennai, India. The Moksha band formed in a coffee shop in 1995, with the members are Leon on vocals, Christy and Allen on Guitars, Bobby on Bass and Ranjith on Drums. Rock the chennai with their music. Moksha was also the only Asian band who performed for the "Iron Maiden".

In the starting of his career they performed in competitions and college fest and funtions. For the next two years Moksha spread its magical mayhem through every major college and semi professional competions in sight standing second to none in all of them. The most notable victories being the ones at IIT Chennai MMC National Law School Bangalore and IIT Mumbai.

It was after the IIT Mumbai win amongst 35 bands from all over the country, that Moksha decided to call it quits as far as competitions were concerned. Moksha goes professional…and the rest, as they say, is history!!! Timmy Madhukar joined Moksha to strengthen up their strings, Brass and all the other jazz, Timmy Addition in the band widened the range of covers and also provide a stong backing for their origianals songs.

Moksha was only the one band who performed in Iron Maiden Tribute Album, which was released by a UK based band recording company called Energie Records. The twin CD pack features various reowned band from all over the world. Moksha plays one Iron Maiden song also one Moksha Original which rocked the Maiden fans. Moksha lists its Influences to be Iron Maiden, Van Halen and Metallica Europe, Deep Purple, Extreme, and Dream Theater among Others.

On Dec 18, 2006, the lead singer of the band, Leon Ireland, died due to a massive cardiac arrest in the early hours of the morning. Ireland, who was married, was neither a smoker nor an alcohol drinker but suffered from Asthma. The future of the band is as yet undecided.

On March 17, 2007, when Iron Maiden was performing for the first time in India (in Bangalore), Bruce Dickinson dedicated the song 'Wrathchild' in Leon's memory.

Why Book Moksha Through ArtiseBooking?