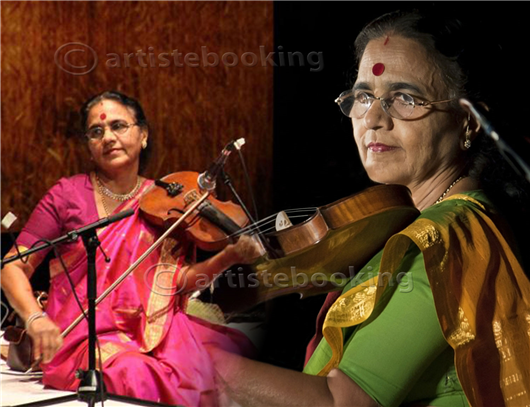 People often refer to her music as the Singing Violin

Dr. N. Rajam (born 1938) is an Indian violinist who performs Hindustani classical music. She remained Professor of Music at Banaras Hindu University, eventually became Chair of the department and the Dean of the college.

N. Rajam was born in Ernakulam-Kerala in the 1938s in a musical family. Her father, Vidwan A. Narayana Iyer was a well-known exponent of Carnatic Music. Her brother, T. N. Krishnan, is also a famous violist. Rajam started her initial training in Carnatic music under her father. She also trained under Musiri Subramania Iyer, and learned raga development from vocalist Pandit Omkarnath Thakur.

Rajam received the prestigious titles of Padma Shri and Padma Bhushan from the Government of India. People often refer to her music as the "Singing Violin".

Rajam started playing violin at age three. By the age of nine, she was a professional musician. With guidance of her father, A. Narayana Iyer, she developed the Gayaki Ang. Rajam has performed across the globe and in numerous places throughout India. She has performed in various countries in Europe, extensively toured the USA and Canada, and performed in countries like Australia, New Zealand, Russia, Netherlands, to name a few.

Rajam was a Professor of Music at Banaras Hindu University (BHU) in the Faculty of Performing Arts for nearly 40 years. She has been the Chair of the department and the Dean of the college at BHU.

She trained her niece, Kala Ramnath, her daughter Sangeeta Shankar, Pranav Kumar of Super 30 and her granddaughters Ragini Shankar, Nandini Shankar. Many of her students from BHU are famous violinists, including Satya Prakash Mohanty, V. Balaji and Swarna Khuntia.

Why Book N. Rajam Through ArtiseBooking?