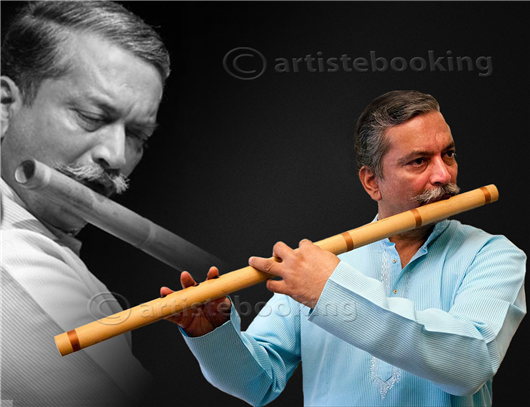 Nityanand Haldipur is an Indian Flute Player and teacher of the Indian Bamboo flute. He was born on 7 May, 1948. He is a purist in the Maihar Gharana tradition, at present learning from Ma Annapurna Devi, in Mumbai, India. He has been rated as a Top grade artist by the All India Radio and was awarded the prestigious Sangeet Natak Academi award in 2010.

Nityanand was born in Mumbai into a Musical family and showed indication of prodigious ability at a very young age. His father Niranjan Haldipur a senior disciple of Pannalal Ghosh, Initiated him into the art of flute playing. Over the next two decades, Nityanand training continued under the late chidanand Nagarkar and Devendra Mudeshwar. Since 1986, Nityanand has been learning from Padma Bhushan Srimati Annapurana Devi Doyenne of the Maihar Gharana.

Nityanand's performances are a perfect blend of style and substance. There is a beautiful balance between his Alap, Jor, Jhala and Gats (compositions), creating the right atmosphere of the Raag he is rendering. He has performed at various musical events worldwide. Nityanand has produced and hosted several shows on All India Radio. These include a weekly music serial on music appreciation and biographical programs of past masters like Allauddin Khan Saheb, Pannalal Ghosh, Vishnu Digambar Paluskar, Omkarnath Thakur, Dinkar Rao Amembal-D'Amel, Amir Khan and Alla Rakha Khan. Haldipur has composed music for several radio shows and for wellness programs like spiritual healing therapy, stress management and art of relaxation. He has collaborated with musicians of different genres like Robert Giannetti(also known as D. Wood), of the jazz band Moksha and Yosuke Yamashita, a jazz pianist from Tokyo, Japan.

Why Book Nityanand Haldipur Through ArtiseBooking?