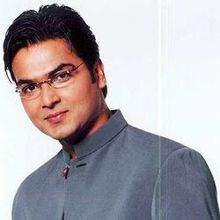 Pawan Tiwari who comes from a family of politicians has always harboured dreams of making it big in television and on the big screen. The actor who has been part of the Sahara One show Piya Ka Ghar Pyaara Lage, produced by The Entertainment Hub will now feature in the production house's horror show The Haunted Nights on the same channel. In addition to this, the actor has also bagged a very important role in Saurabh Tewari's upcoming show on Life OK, Jaan. Talking about his upcoming ventures, the actor states, "Yes, it is true that I have bagged a character-driven and powerful role in Jaan. However, I do not know many details as I have not started shoot. I will be starting shoot in few days time. As for Haunted Nights, I play a victim who is one of the central characters in the episodic. We will be starting shoot for the same in a week's time." On his track in the ongoing show Piya Ka Ghar, the actor tells us, "Well, the show recently went through a revamp post which my track has not been developed yet. As you know, I have been playing the role of Prakash who happens to be the friend of Bittu. I am waiting for my track to open up again." Here's wishing Pawan all the very best for his future endeavors.

Why Book Pawan Tiwari Through ArtiseBooking?