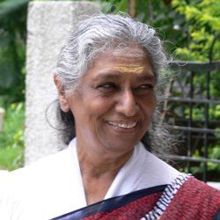 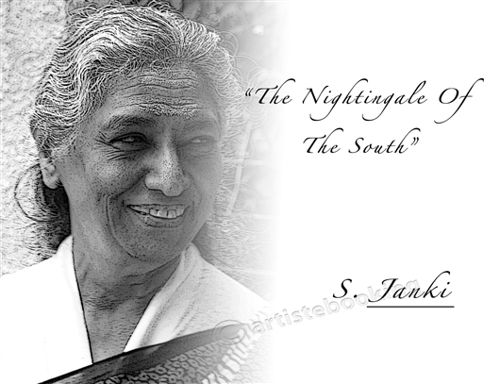 Sishtla Sreeramamurthy Janaki (born April 23, 1938), commonly known as S. Janaki (Telugu, Kannada,Tamil,Malayalam,)  is an Indian playback singer. Renowned for her voice modulation abilities, she has sung in many Indian languages, most frequently in Telugu, Kannada, Malayalam, Tamil, and Hindi.Throughout a career spanning more than five decades, she has recorded over 35,000 songs, won four National Film Awards and 28 different State Film Awards. Her association with singer S. P. Balasubramanyam and composer Ilaiyaraaja is among the most popular musical combinations in South India. She is fondly better known as, ""The Nightingale of the South"". She is a recipient of a Honorary doctorate and the Kalaimamani award from Tamil Nadu State Government.In 2013, the Government of India announced the Padma Bhushan award for her, at the age of 74. The singer refused to accept the award, because it came too late and because South Indian artists weren't given their due recognition.

S. Janaki was born in a Telugu speaking Brahmin family in Pallapatla, Repalle village, in Guntur, Andhra Pradesh. Her father Sishtla Sreeramamurthy was a teacher and an Ayurveda doctor. Her father worked in Sircilla in Karimnagar district. She was interested in music from an early age and started performing at the age of three. She learned music from Sree Paidiswamy, a Nadaswaram Vidwan for only one year. She also learned a few songs from Varanasi Balaramayya in Kovvur. She was inspired from film music and used to render the songs of Lata Mangeshkar, P. Leela, Jikki and P. Susheela on stage before entering films.

Why Book S. Janaki Through ArtiseBooking?