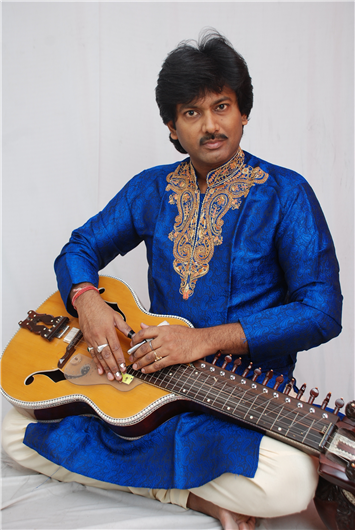 Salil Bhatt is an Indian Slide Guitar Player and classical Music player. He was born in Jaipur, Rajasthan, India. He created the musical instrument Satvik Veena. He is the grand son of fellow slide Player and Grammy Award winner, Padmashree Pt. Vishwa Mohan Bhatt. His Latest album, slide to freedom 2 - Make a Better World, was nominated for a Canadian Juno Award. Salil Bhatt represent the dynamic face of the new age in India Music.

Salil's baaz [style] assimilates the 'gayaki' [vocal] and 'tantrakari' [instrumental] representations which makes his playing complete with innumerable variations. Salil specializes in playing high-speed taans demostrating his great skill on the Satvik Veena. Trained by his mentor Pt. Vishwa Mohan Bhatt, Salil follows the Classical Indian Raga authenticity to its strictest norms and creates the purest picture of every Raga he plays.

Creator of the Satvik Veena and heir to a 500-year musical legacy, Salil Bhatt represents the dynamic face of the new age, Indian musician. Being hailed as the 'Global Indian Musician', Salil has done it all. From Solo Concerts and International Collaboration to Exotic Jugalbandis and Global Fusions, Salil has not only managed to marvel audiences in India, bit also has a big fan base in Canada, Germany, Australia, America, Taiwan, England, Switzerland, Iceland, Ireland, Scotland, Wales, Saudi Arabia, Oman, Kuwait, Singapore, Spain, Austria, and Italy. That too, in just a span of his trailblazing 25-year career!

Having received a Pre-Grammy Award nomination which speaks volumns of his highly successful international collaborations, Salil is the harbinger of rare honors for India as he is the first ever musician to perform inside the Parliament of Germany. He is also the first ever Indian musician to perform in Iceland and the first Indian musician to be invited by the Taiwanese Government for artist residency. Salil V. Bhatt represents the tenth generation of the famous Bhatt lineage, where music has been flowing for more than five hundered years. Salil is the son of the legendary slide player and India's GRAMMY AWARD winner Padmashree Pt. Vishwa Mohan Bhatt.

Why Book SaLiL Bhatt Through ArtiseBooking?