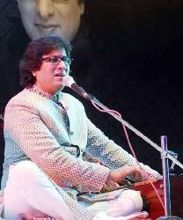 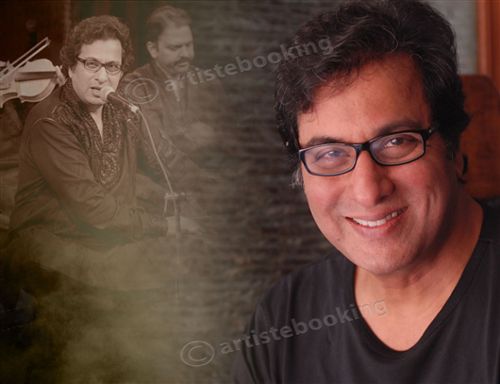 Talat Aziz is an Indian Singer and Ghazal Singer. He was born in ( 11 November, 1956 ) Hyderabad, India. Talat is also a finest singer in India and widely known for his singing talent in Ghazal singing, he is also worked as playback singing in movies also.

Talat was born in Hyderabad, India on 11 November, 1956. Talat was born in a Muslim family of abdul Azeem and Sajida Abid. Talat was hails form a family who were great patrons of fine art and they used to organize Mehfil in their house and inviting artist such as Jagjit Singh, Jan Nisaar Akhtar and many more. He took Intial training form Kirana Gharana, formed by Abdul Karim Khan Saheb, his first mentor was Ustad samad Khan and later by Ustad Fayaz Ahmed who was great musicians in their time. When most of the boys of his had fun and enjoy their life that time Talat was still learning at the age of 17 by his master. He is also trained under classical music Ustad Samaad Khan and Faiyaz Ahmed Khan for his Ghazal training and become the disciple of Mehndi Hassan in 1978. He went to Hyderabad Public School when he finished his ISC and then joined the Indian Insititute of Management and Commerce for his B. Com (Hons) Course. He is Sania Mirza's Uncle.

After the initial training, Talat decided to learn from Maestro Mehndi Hasan, On many occasions he shared stage with Mehndi Hasan such as a Tour of The US and Canada in 1986. His major concert was in Hyderabad at King Kothi, he sang before a crowd of over 5000. He Sang Kaise Sukoon Panoon and some Ghazals by noted shaayars of Hyderabad. After Completed her graduation he shifted to on the suggestion of Jagjit Singh in 1976. With the help of Jagjit singh he released his first album in 1979. But he faced too struggle for living in mumbai and set his position as a Recognisable Singer in the industry. Talat also sang some ghazals in film like Umrao Jaan and Bazaar which were Super Hit. Talat has also composed music for TV serials and has also acted in several of them. He composed music for many Television Serial's like Deewar, Baaz, Adhikar, Ghutan, Sailaab Aashirwaad and the magnum opus, Noorjehan. His acting was also worked as actor and his acting was appriciated in serials like Sahil, Manzil, Dil Apna Aur Preet Parayee and Noorjehan a TV Serial written by Nida Fazli. Talat released many albums like Talat Aziz live, Images A Team Come True, Lehren, Ehsaas, Suroor, Saughaat, Tasawur, Manzil, Storms, Dhadkan, Shahkaar, Mehboob, Khubsoorat and many more. in 2009 Caravan e Ghazal in which Sonu Niigaam also participated in a duet 'Qurbaton mein bhi' a ghazal written by Ahmed Faraaz.His latest solo album was A Tribute to his Master which was recorded in Los Angeles a tribute to his guru Mehdi Hasan and the tabla accomoaniment for this unique album was none other than the great maestro Ustad Tari Khan. This album got a nomination in the best ghazal album category in the prestigious GIMA Global Indian Music Awards. Recently he Pankaj Udhas Anup Jalota with a young upcoming artist Sumeet Tappoo collaborated in the ghazal album Destiny which was released by Shri Amitabh Bachchan.

The singer was the first ghazal artiste to release a ghazal music video of Tasavvur, in 1987 when a video album was not even thought of. He is often seen on the small screen in various roles as a music judge. However, his fans would love to see him on the silver screen too. He worked in a film in 1990. It was Mahesh Bhatt's Dhun opposite Sangeeta Bijlani. The film never got released for various reasons but the music was released by HMV in 1991 and was a great hit of that time featuring tracks like 'Main Aatma tu Parmaatma' a bhajan sung as a duet with none other than Mehdi Hassan and Talat and other tracks like "Yaad aane waale' Laagi prem dhun laagi", which became a rage with the young crowd. The advent of the ghazal as a popular genre began in the late 1970s and became a rage in the 1980s when artists like Talat Aziz used to sell out albums in the hundreds of thousands of units.

Talat Aziz has been singing in concerts for over three decades and has traveled the globe with his sell out performances. He celebrated his 25 Years Anniversary with the launch of a special audio and video album in 2004 at NCPA Mumbai where the veritable who's who of the music industry were present and the ones like Mehdi Hasan and Lata Mangeshkar who could not make it sent in their messages on video and a special documentary on his life was screened. This was released by Universal Music India as a special commemorative DVD with the audio cd pack of two released by Times Music.

Recently in November 2013 he started hosting a special radio show titled Carvaan e Ghazal as an RJ on 92.7 BIG FM which is relayed every Sunday 9 pm to 11 pm nationally in 45 cities all over India. This radio program is about ghazals, ghazal singers, ghazal lovers ghazals in fims and is currently in the top 3 programs on the channel. Its a weekly and has got an amazing response. Recently he had Ghulam Ali Saheb as a guest and Chitra Singh talking about Jagjit Singh on his birth anniversary.

Talat has released many albums. He is equally versatile while singing a popular sufi number like "Damadam mast Kalandar" or the soul stirring rendition of "Aaina Mujhse Meri" from the film Daddy. Between 1979 and 1984 he was the top artist recording for Music India Company. In 1984, he joined HMV, the giant recording company. He also worked with Venus Records for a brief period and then released albums with Universal Music India and the latest with Saregama Music. Some of His Famous Albums are:-

Why Book Talat Aziz Through ArtiseBooking?