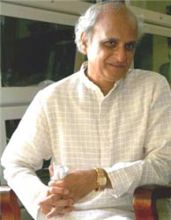 Pandit Ulhas N Kashalkar (born 14 January 1955) is a Hindustani classical vocalist. He has received training in the Gwalior, Jaipur and Agra gharanas, and is considered a representative of all three schools.

Pandit Ulhas Kashalkar was born in Nagpur. He received his first lessons in music from his father N D Kashalkar, a lawyer by profession and an amateur vocalist and musicologist. He went on to study music at Nagpur University, topping his post-graduate class. Around that time, he trained under Rajabhau Kogje and P N Khardenavis.

Both Rambhau and Gajananrao were traditionalists which finds reflection in Kashalkar's vocalism. He possesses the ability to switch between three styles (namely Gwalior, Jaipur and Agra), at times even in the course of a single performance. He adheres to the aesthetic contours of each individual style, and also to the formal demands of the raga being presented. He is noted for his authentic presentations of obscure traditional ragas. In an uncharacteristically expansive passage, the veteran music critic Prakash Wadhera once noted:
Ulhas is a fabulous vocalist, still in his middle years and young, who has an old musical head stuffed with innumerable current and rare ragas and compositions. Like a computer he never errs in any raga or composition howsoever intertwined or tricky it may be. He, just seems to press one key and out comes a raga in the true Jaipur colours, another to obtain a melody attired in the Agra style and still another to get a raga in the Gwalior habiliments. One can only imagine Kashalkar's questionless loyalty to his various gurus, and his own prodigious capacity to assimilate and consolidate the incoming knowledge.

Why Book Ulhas Kashalkar Through ArtiseBooking?