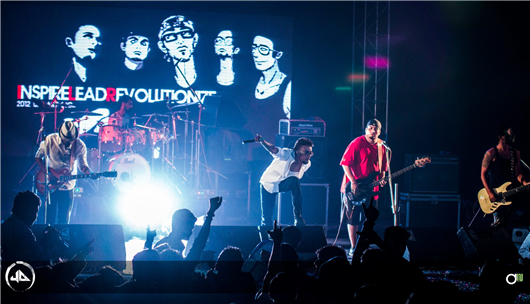 Underground Authority is an alternative rock / rap rock band from India. Formed in early 2010, in Kolkata, their music is flavoured by a blend of protest poetry, reggae, alternative rock, rap rock and hard rock. The band is noted for their socio-political messages / Anti-capitalism agenda in their song lyrics and also for their Music to express and not impress quote. The current line-up includes Santhanam Srinivasan Iyer (lead vocals), Adil Rashid (lead guitar), Kuntal De (rhythm guitar), Soumyadeep Bhattacharya (bass guitar) and Sourish Kumar (drums). Underground Authority was formed in early 2010, when two of the previously existing acts from Kolkata, !Banned and Skydive collaborated to put forth a new act together. They primarily started off performing in the premier pubs of Kolkata and participated in major music events, including the Closed Mic / Best of open mic at Someplace Else and Tuborg Unseen Underground Pub Rock festival. They were also the runners up at a national rock band competition, Yamaha Asian Beat 2010, held at Hard Rock Cafe in Mumbai.

Why Book Underground Authority Through ArtiseBooking?