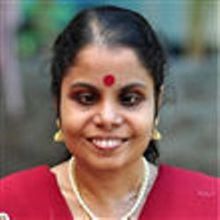 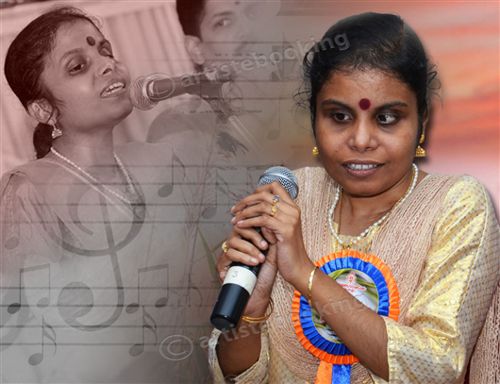 Vaikom Vijaylakshmi was blessed with the gift of voice but deprived of the pleasures of vision. She was born on October 7, 1981, on Vijaydashmi day,  Living near the Udayanapuram temple in Vaikom, Vijayalakshmi is the only daughter of Muraleedharan and Vimala. It was only after her parents came to terms with the fate of her incurable blindness that they moved to Chennai. Here the young Viji grew up listening to Tamil movie songs by the likes like Ilayaraja and M S Viswanathan. She was spotted with the talent of catching a tune at the first hearing and reproducing it exactly in all its subtle nuances. Later, her parents bought classical music tapes of Jesudas, which Viji would listen to, most ardently. In a matter of less than a year she learned more than a 100 ragas and made her own compositions. Till then she had no formal training in music.Music discipline insists for training from a knowledgeable teacher. But her effortless raga `alapana' and `swara' delineation, surprised the most discerning of `Vidwans'. Her `arangettam' was conducted at the Chathamkudi temple in Vaikom. In 1987 she met her `manasaguru' Jesudas who was amazed by the childs `jnanam' in identifying the most complex ragas and her mastery in rendering ragas like `Todi' and `Bhairavi'. The following year Viji held a performance at the prestigious Shanmukhananda Hall in Mumbai.

Viji, in the first 10 years, had performed at more than 400 stages in all the major `sabhas' in Chennai, Tanjore, Madurai, Coimbatore and other major cities of India.

Meanwhile, another significant achievement was her mastery over a one-stringed instrument. The `gayatri tampuru' , presented to her by a connoisseur, was electrified and modified by her father Muraleedharan. The kulapati of Carnatic violin Sri Kunnakudi Vaidyanathan was mesmerized by her veena recital and gave it the name `Gayatri Veena'. She has performed several concerts with the instrument.Since 1995, Viji has been playing it at the Chembai Sangeetotsavam at Guruvayoor .She played at the prestigious Soorya Festival in 2001As temple performances are hardly rewarding financially, Viji has had to sing and play film tunes to keep her going. Today she has a repertoire of almost 300 ragas and double the number of compositions. Viji loves listening to concerts of MS, Madurai Seshagopalan, Balamuralikrishna and Maharajapuram Santhanam. Her favourite ragams are-Hindolam, Shubha Panthuvarali, Sivaranjini, and Madhyamavati. Of late Viji has turned to Hindustani.

Why Book Vaikom Vijayalakshmi Through ArtiseBooking?