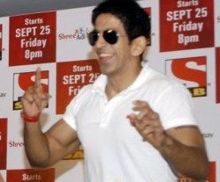 Vishal Kotian, the handsome actor with big biceps who played the role of Shri in SAB TV's hit show 'Shri Adi Manav'? The still good looking actor is all set to explore new avenues. Vishal has now become a producer. The talented actor has added a new feather to his cap. Vishal's debut project is a joint venture with Shri Adhikari Brothers and will be aired on SAB TV. Vishal's production house is called Drama Queen Company. Moreover, Vishal will play the lead in the show. The show will be a comedy revolving around two individuals with different back grounds falling in love with each other. But the story takes an interesting turn when they get married. We have also learned that veteran actors like Shobha Khote, Rakesh Bedi, Anurag Prapanna have been finalized for the show. 'Tedhe Medhe Hain Par Tere Mere Hain' is expected to go on air in the month of August and the shooting will start next month. When contacted, Vishal confirmed the news and said, "Yes, I am producing a show for SAB. It's a very interesting concept and I am really looking forward to it."

Why Book Vishal Kotian Through ArtiseBooking?