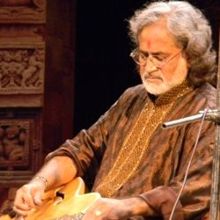 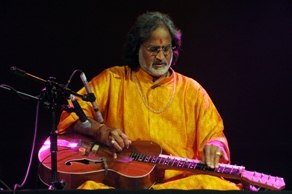 Vishwa Mohan lives in Jaipur, Rajasthan, India, with his wife and two sons. His elder son Salil Bhatt is a renowned Mohan veena player (and also a player of the Satvik veena), whose album Slide to Freedom Part II was nominated for the Canadian JUNO AWARD, while his younger son Saurabh Bhatt is a well known composer. Vishwa Mohan Bhatt's grandson Satvik Bhatt is also a musician and a Limca Book Of World Record holder for being world's youngest Mohan Veena Player at the age of 3 and a half years and also for identifying 45 ragas at the age of 3 and a half years. Vishwa Mohan Bhatt's parents late Manmohan Bhatt and late Chandrakala Bhatt were also teaching and performing musicians who imparted knowledge of music to V.M Bhatt. His nephew, Krishna Bhatt, plays the sitar and tabla.